New Technology is Helping Those We Support Increase Independence

Hanna is one busy and talented young woman. She sings in a glee club, volunteers at the library, attends dance class, interns in the neonatal intensive care unit at Children’s Hospital (similar to the one where she started life, herself), participates in a Circus Juventas program, enjoys regular girls’ nights out, and more. She is organized, intelligent, and ambitious. However, when it comes to cooking and cleaning tasks, Hanna needs some guidance. 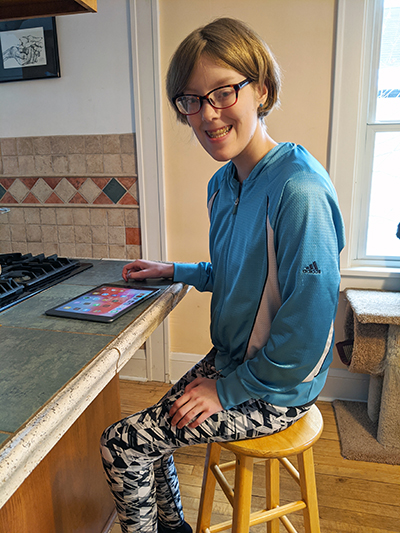 She has several PCAs who assist her each week, in addition to Reach Community Living Specialist Hailey. Yet, Hanna craves more independence. “I want more chances to do things on my own,” she says. So recently, Hailey introduced Hanna to some special assistive technology, AbleLink Smart Living Technology, which can be used on an iPad. According to the AbleLink website, the apps are designed “to enable individuals with cognitive disabilities to experience a more self-determined and fulfilled life.”

Hanna has never been intimidated by technology. She easily took to an iPad at age 9 and deftly navigates numerous aspects of her smartwatch. In fact, the number of steps the watch pedometer registers signifies the amount of other screen time she earns each day for Netflix, games, texting, and other technology use.

Now she also grabs her iPad to open AbleLink apps Visual Impact and Endeavor. Visual Impact is loaded with various pre-recorded slideshows that have step-by-step directions with images to walk a person through different household functions. Some include making a grilled cheese sandwich and dusting the house. More importantly, Hailey and Hanna are producing their own custom multimedia instructions in the app, so that Hanna is not only prompting herself in her own words, but seeing that actual items in her own home. For instance, in her self-made tutorial for cleaning the shower, she instructs herself in the first slide to, “take out the rag and tile cleaner from the bathroom cabinet.” She goes on to remind herself to clear the shower of its items, spray the cleaner all over the walls, wipe them with the rag, and so forth.

Endeavor is a scheduling app, programmed with reminders for tasks and commitments, such as taking needed medication and preparing for social activities (ex., “Remember to grab your gloves.”). Endeavor and Visual Impact can be linked, so that when an alert is activated by Endeavor, the individual can use Visual Impact to then take the needed steps to complete that activity.

Hanna is excited for what this new way of learning will mean for her, saying that her family and others “won’t have to give me directions.” With that in mind, Hailey and Hanna are busy creating new lessons Hanna will use to strengthen her learning connections, and ultimately, her independence.

Watch as Hanna views one of the tutorials she made for starting the dishwasher. 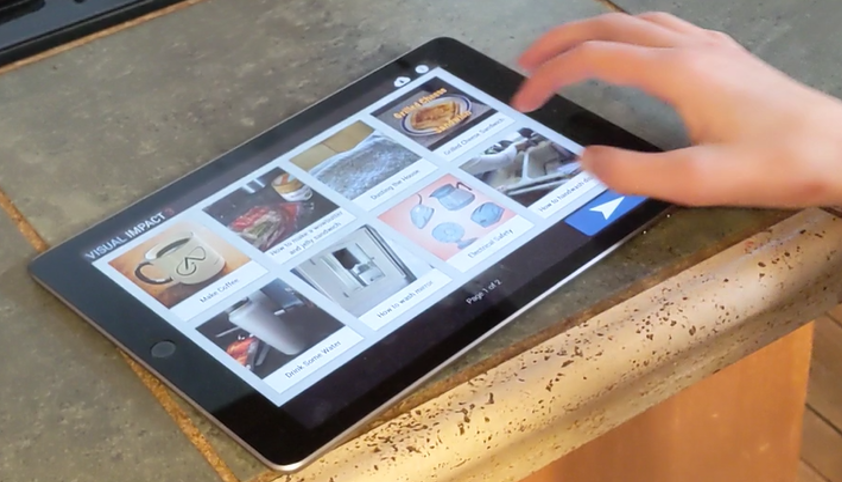