Nicholas Has Made Successful Progress Toward Independence

Cari Tupy learned about Reach, randomly searching the Internet for local programs in 2016, when her son, Nicholas, was 16 years old. What she found has changed their lives.

Nicholas began in our Teen Explorers program, a weekly program that focuses on engaging teens with their community. Cari says that it took Nicholas “out of his comfort zone.” She explains that they live in Prior Lake, and being involved in the teens program brought him into the Cities to try things he normally wouldn’t have done with his family. As Cari states, “When he goes to a Reach for Resources event, he feels like it’s really open to everyone. He feels included, he feels involved, he feels part of a community. He doesn’t feel segregated, he doesn’t feel different. He just feels like he’s being accepted for who he is, and that’s it. It is probably the best feeling for him, and it helps him thrive the most.”

Cari admits that it’s tempting for parents to want to “bubble wrap” their children. However, she acknowledges, “We can’t expect them to just one day be independent unless you take a whole bunch of baby steps before then. [Teen Explorers] really did help start building those skills when Nicholas was a teenager, so that they’re going to be able to transfer over into adulthood. If you wait until they’re 21, it’s not going to happen.” As Cari explains that although what the family does is important, “as an individual, for them to have the opportunity to try new things really helps them to determine what they like, what they don’t like and to be successful in the community without having to depend on others, while still having a safety network.”

That growth is evident in Nicholas. An example can be traced to how the teen program brought participants to movie theaters. Now, he not only goes to the movies without support, he’s also learned to advocate for himself. One day at the theater, someone stole his refillable popcorn buckets, which he had purchased for the year. Nicholas reported it to the manager, who seemed hesitant to believe him at first. So Nicholas asked, “Well, don’t you have surveillance cameras?” Sure enough, they pulled up the footage and saw the person who stole it. By his own actions, Nicholas received a replacement bucket. 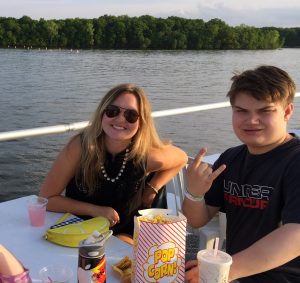 Nicholas with Reach staff member Morgan at a Rec program

The effects for Nicholas were almost immediate. Cari mentions, “When we started working with Jesse [at Reach], from the first point on, they were building those steps. You could see it with the progress reports, he was able to build those skills in a very short period of time.” And Cari is quick to emphasize that Reach stands by their philosophy of doing “with, not for” the individuals they support. “One thing that has been amazing about Reach for Resources is that it has given Nicholas the opportunity to make mistakes—not huge ones—but to try, and that’s how we learn. It pushes their boundaries.” She adds, “I can honestly tell you that that’s what sets Reach’s program aside from other ones,” says Cari.

Since Teen Explorers, Nicholas has progressed to being active in other Reach programs, including dances, On the Town activities, singles nights, and more. He has become increasingly confident in other ways by giving back to the community as well. He is a bell ringer for the Salvation Army and volunteers for his youth group. Cari says, “It is wonderful to see him confident and so engaged in the community!”

It seems though, that Teen Explorers will always be close to Nicholas’s heart. Cari shares that she envisions him helping younger individuals go through the program someday. “I can see him cycling through that way.” It was the respect and dignity shared in the program that she believes touched Nicholas so deeply. Referring to Reach, she says, “Loving someone for who they are on the inside. That’s what you do. You can just see it in every single one of your participants.”