A couple of months ago, Danny, one of Reach’s Employment Specialists, was with one of his participants at their local Goodwill. Danny’s participant, Matthew, has a passion for thrifting, antiquing and collecting. Because of his passions, Goodwill was always his dream job. Excited to apply for a job, Matthew and Danny entered their local 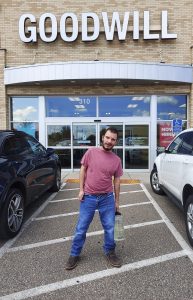 Goodwill. Upon speaking with the manager, they learned employment specialists/job coaches were not allowed in the building while employees were working their shifts. Also, Danny wouldn’t be able to accompany Matthew to the interview. If Matthew got the job, Danny would only be allowed to provide assistance during orientation. For a company that prides itself on helping marginalized members of the community find and keep jobs, this didn’t make sense. Knowing how much a job at Goodwill would mean to Matthew, Danny could not let it go.
Danny decided to do some research into Goodwill’s employment policy for people with disabilities. He ended up spending the better half of a day calling Goodwill offices all over the country, and even their headquarters in Texas. Danny struggled for a while to get through to a real person, so he left emails and voicemails wherever he could. Finally, he get a response from Goodwill’s Head of HR!

In the email Danny received, the Head of HR was incredibly apologetic and explained why the store manager they spoke to was incorrect. The next morning, Danny had a phone call with Goodwill’s Head of HR, discussing their proper procedure for hiring, and all the steps put into place to help people like Matthew gain employment at Goodwill. They explained to Danny, what he was told does NOT match Goodwill’s policies, and that employment specialists/job coaches are always allowed to be there to provide support. Then, the Head of HR gave Matthew the green light to go ahead and apply for a position at any Goodwill location.

Matthew ended up applying for a position at his local Goodwill. Within a few days he got an in-person interview, which Danny was able to attend. A week later, Matthew was officially offered a position! Matthew has been working at Goodwill a couple of months now and LOVES his job and the people he works with. He always shows up with a great attitude, ready to work. 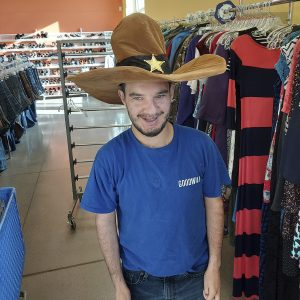 Throughout Matthew’s employment at Goodwill, Danny has been able to be on-site assisting Matthew in any tasks he needs additional guidance for. Matthew has taken initiative to learn how to perform his own COVID health screening at the beginning of each of his shifts and has been independently doing his monthly online safety trainings and knowledge checks. Managers have told Matthew he’s the fastest donations processor they’ve ever seen. Compliments like these helps boost his confidence and gives him something to be proud of at the end of the day.

Thanks to Danny’s persistence, Matthew is thriving at a job he loves. This will hopefully lead to even more opportunities for individuals we support through employment. Thanks to Goodwill for taking the matter seriously and being swift in their response to correct the situation.