A Community Living Specialist for Reach, Miles has no intentions of leaving his position anytime soon. In fact, he says, “Even if someone offered me two-and-a-half times my salary, it wouldn’t be worth it,” explaining that the money wouldn’t be enough to compensate for the happiness he has found at Reach. “I immediately felt like I was part of the team,” says Miles, who joined the staff in June 2019. He cites the genuine nature of his supervisor and other co-workers and states, “I like working at a place where I can be myself.” 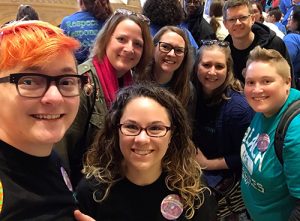 Miles, left, advocating at the MN Capitol with other staff members

It’s not just his fellow employees Miles admires, but also those he supports. Explaining how one person had been having trouble advocating for himself, Miles described the rewarding feeling of seeing progress. The man greeted Miles one day by relaying how he had taken proactive steps to address a difficult situation. When Miles realized that he had played a part by encouraging this individual to believe he is worth standing up for himself, he couldn’t help but feel proud.

Studying both psychology and drama therapy, Miles particularly appreciates that he’s able to gain valuable experience toward his future career goals. He feels he is growing in this position, but just as importantly, he says that he likes seeing how the people he supports as a community living specialist are growing.