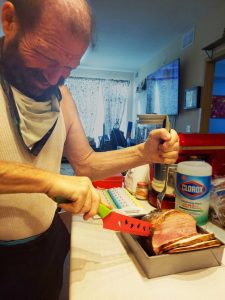 Robert loves to cook with staff and try new recipes. To start off the holiday season, Robert requested to bake a brown sugar glazed ham. Fresh out of the oven, Robert is neatly slicing his baked ham with brown sugar glaze. Robert reports that it was a really good ham!