Perhaps nothing says “independence” better than moving into your own house. One married couple Reach supports did just that this past summer. John and Ashley now call a charming two-story home in Richfield theirs, happy to be owners rather than renters, as they were with a previous townhouse. They are also excited about “having a place that feels more permanent,” and is in a “neighborhood that feels very safe.” 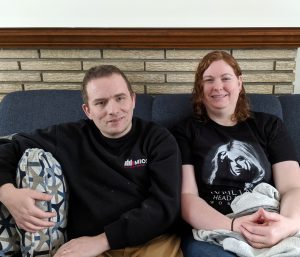 John and Ashley in their new home

Of course, with the advantages come some drawbacks. They’ve already had to deal with some basement flooding, and as John explains, “There’s a lot more bills.” Luckily, Reach worker Aly helps keep them on track with budgeting, as well as supervising some cleaning tasks when she visits twice each week. “I’m here to oversee,” she explains, making sure that John and Ashley feel empowered to maintain their self-sufficient lifestyle. “They take pride in cleaning,” Aly says.

Aly not only offers assistance at the house, but also beyond it, providing some transportation to the couple. John and Ashley receive additional service from Minnesota Independence College and Community, which is where they originally met in 2009, before dating and eventually marrying in 2017. While Aly takes them to Target, an MICC staff coordinates grocery store runs.

John and Ashely frequently find time for transportation beyond the Twin Cities too. Travel experiences with family members have brought them to several states and multiple countries in Europe and Asia. Yet, when their excursions come to an end now, they will be returning to their “home sweet home.”

They are grateful to those who have supported them to make this milestone happen. “Reach has helped considerably in getting us to this point,” John says. And when looking at a city map, they can now claim their very own point on it.