When friend and fellow band member Chris Davies was looking for a graphic designer to create the artwork for a music album, Reach staff member Larissa Beck knew just the person. Maddie Tate has used Reach’s employment and semi-independent living and services for about two years now.

Maddie has an enjoyable job at Target—recently having been promoted to the shipment department, but also received a two-year degree in Illustration from Minneapolis Community and Technical College in May 2019. Larissa was aware of Maddie’s graphic design skills and recommended her to Chris, who, after talking with Maddie, quickly commissioned her for the project. 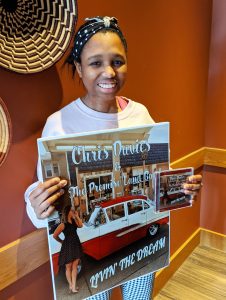 Maddie holding the storyboard of the CD cover and the CD itself.

Maddie reviewed some possible cover photos that Chris sent her and said she got inspired by the pictures. “I knew exactly which direction I wanted to take it.” Drawing on the knowledge she had gained in her classes, including Typography and Color Theory, she proposed font options and other ideas to Chris. “She listened to my vision and then used her graphic design skills to deliver what I was looking for,” said Chris, who emphasizes how much he enjoyed working with Maddie on this project. “I have received numerous compliments on the design work for the CD. I found her to be a very pleasant person and felt like we had a true partnership with this effort.”

Maddie admits, “It was validating to know that people think I have potential.” But Maddie doesn’t just have potential; she has the intelligence, skills, and ambition to go with it. “My main aspiration is to have my own brand or to be involved with how video games are created,” she says. Maddie admires the founders of tokidoki, an internationally recognized lifestyle brand that sells apparel, cosmetics, accessories, toys, and more. She also enjoys video gaming and is fascinated by the variety of talent that goes into designing a game. “I would love to be a concept artist, being part of a team to help create a bigger thing.”

In the meantime, Maddie hopes to land some more contract work in graphic design and is happy with her current employment situation and the relationships she has built with Reach employment specialists LaKeysha and Naomi. “They really helped me advocate for myself at work and to be more independent and assertive.”  Maddie credits each of them for cultivating her organizational skills, in particular, and says, “Reach has been so helpful in my personal life and in my career life. I don’t know where I would be without Reach.”

And although we don’t know where Maddie’s career will be in 10 years, it will be with whatever dreams she designs for herself.